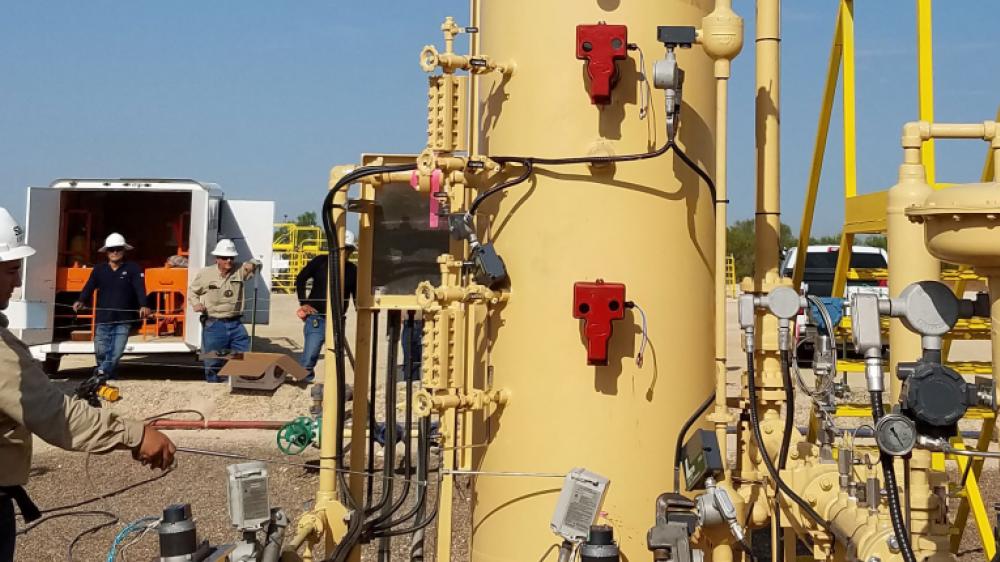 Recently, a producer ran into a problem in Catarina, Texas. As the Technical Development Engineer, he was responsible for keeping this field producing smoothly. But it seemed his liquid level controller wasn’t maintaining the proper interface of oil and water.

How a Separator Works

Oil and gas producers use separator vessels (like the one below) to separate a well stream into gas and liquid. Typically the installation of separator vessels is near the wellhead. They come in three styles: horizontal, vertical, or spherical.

When fluid enters a three-phase separator, separation begins naturally. This is due to the different specific gravities of the elements.

While this separation process does occur naturally, some producers choose to introduce heat into the vessel, which accelerates the process.

The problem with the liquid level

Upon examination, it was clear that the displacer on the level controller was malfunctioning.

This malfunction was leading to erratic, imprecise dumping of oil and water rather than steady dumping after the appropriate amount of separation occurred.

His first step was to reach out to the original product manufacturer. He ran into delays attempting to solve the problem by phone, and grew frustrated due to the downtime.

He then contacted his corporate office in Houston to see about replacing the units. The Houston office contacted Kimray’s local team in Corpus Christi for help.

Since the site was running on electric actuation, the Kimray team recommended outfitting the separator with the Gen II Electric Level Controller. Kimray sent certified technicians to the site to install it.

After the 1-hour installation, the crew re-opened the ball valve and allowed the vessel to re-fill. They watched as the displacer rose along with fluid, activating the dump valves and processing the fluid correctly. The system was again fully operational.

Alex Crow
Alex Crow serves as a Product Manager at Kimray, and is responsible for Kimray's line of electric actuators and control products. He collaborates with Kimray's engineering, manufacturing, and quality teams to optimize the performance of our products and make a difference for our customers.
More by Alex
POSTED IN: