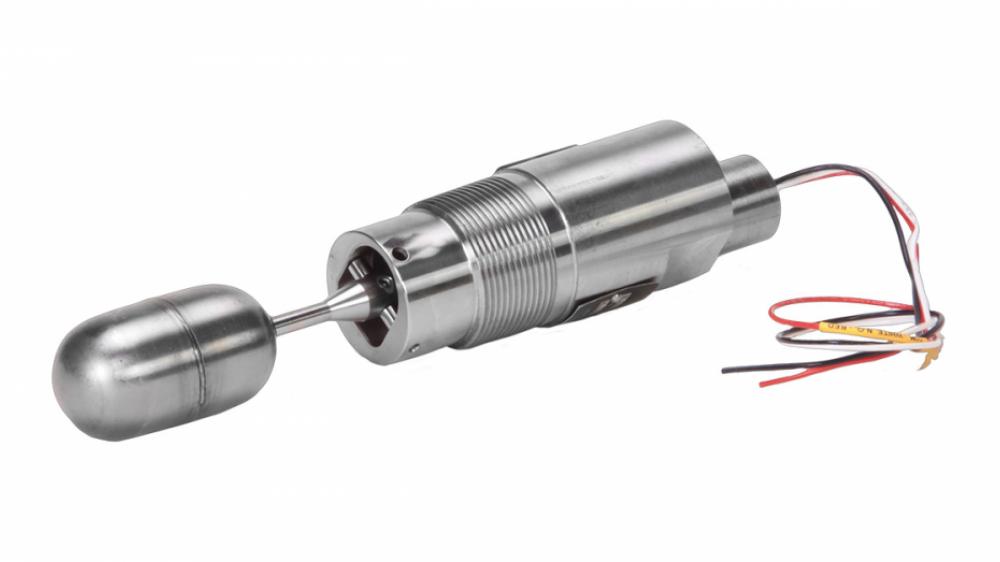 The Kimray Horizontal Electric Liquid Level Switch was originally developed to operate solenoids, relays, and small motors. These devices typically require several watts of power, and fit well in the range of 3W to 100W for the standard horizontal level switch.

However, with the industry moving to automation and process monitoring, there is a need to operate in the microwatt range of power typically provided by PLCs, RTUs, and other distributed control systems.

The low power Kimray Electric Liquid Level Switch covers the range of 0W to 25W of power. This fits in nicely with the demands of today’s automation equipment.

If you use a standard switch in a low power application, you can experience false-open readings after some time. This is caused by an aged buildup on the contacts due to the lack of necessary current to keep the contact surfaces clean. Typically, the contacts can be refreshed by applying a heavier switching load to the contacts even for a short amount of time. The Kimray Electric Liquid Level Switch employs rhodium contacts that prevent potential oxidation issues.

Are the Electronic Level Switches eating your lunch? There are any number of issues that could cause you some headaches with these controllers. This is especially true if you are not all that familiar with them. You may be testing them incorrectly or operating them outside of the electronic parameters they were designed for. Before you become frustrated with these controllers we should take a look at a few things.

Here is some basic information and testing procedures for the Electric Liquid Level Switch:

Using The Level Switch Below The Minimum Rating

If the level switch has been in operation for some period of time with a switching load of less than 3W, there is a possibility that the tungsten contacts in the internal reeds switch have become oxidized and will increase in resistance. This would be observed when measuring an increased resistance in closed contacts. Typically, a user can expect the closed contact resistance to be a few Ohms or less.

If the contact resistance is much higher than a few Ohms, or the resistance of closed contacts seem to be reading erratically, it is very possible that the contacts have become oxidized. This effect can usually be repaired by applying a heavier switching load to the contacts. There are a number of ways this could be done. It all comes down to allowing electric current to flow through the contacts.

Here’s how to bench test a level switch to check for contact oxidation.

By operating a heavier load with the switch the contacts will have conducted a higher current that can burn through any oxidation and provide clean contacts once again. However, this will not prevent reoccurrence if the level switch is controlling a very light load (<3W).

One occasion of this type of failure came from a customer report of a level switch falsely indicating liquid level on a known empty vessel. The level switch was then removed from the vessel and returned to Kimray. Upon receiving the level switch, the switch contacts were tested with an Ohmmeter and found to be working correctly—the customer complaint could not be verified.

Upon further investigation, the application was discovered to be detecting the level switch using a micro controller with very low current levels (micro-amp range).

At these low currents, it only takes a thin oxidation layer to dramatically increase the resistance of the contacts. This causes a false reading of the level position. The auto-ranging Ohmmeter can supply a varying amount of current. In this particular case, simply measuring the resistance of the contacts apparently corrected the minor amount of oxidation present, thereby “repairing” the level switch.

This is an example of a simple circuit for testing the level switch using an ordinary household 60W light bulb.

By closing the power switch and manually moving the float (or manual override), the light will turn on and off as the float makes and breaks contact of the reed switch.

In the above circuit, the level switch is controlling a 60W load.

The maximum voltage the switch contacts experience is 120VAC. The maximum current through the contacts is approximately 500mA AC current.

An Application Example 1: Driving a Relay

An easy solution for this application is to add a parallel resistance to the relay – increasing the overall switching power of the circuit.

Since the resistor normally consumes 1.2 W of power, it should be selected with a power rating of greater than 2.4W. Total power consumption of the switched load is now 3.2W.

However, the closed contacts of the switch only see (5V / 100K Ohm =) 50uA of current. The resistor only consumes [(5V ^ 2) / 100K Ohm=] 0.25mW of power. The tungsten contacts in the level switch can easily begin to build oxidation under these conditions causing the switch contact resistance to dramatically increase. If there is sufficient current available from the 5V source, you could fix this circuit by replacing the 100K pull-up with a low value power resistor…

If a higher voltage is available, you can reconfigure the circuit as follows:

The above circuit reads 4.95V for closed contacts and the switch is driving a 3.8W load. For open contacts, the uProcessor reads near 0.0V and the resistor divider power consumption is 3.0W.

Alex Crow
Alex Crow serves as a Product Manager at Kimray, and is responsible for Kimray's line of electric actuators and control products. He collaborates with Kimray's engineering, manufacturing, and quality teams to optimize the performance of our products and make a difference for our customers.
More by Alex
POSTED IN: