How to Weight a Float Ball for Liquid Level Control

To control the gas, liquid, and oil interface in process equipment, many producers employ a liquid level controller in conjunction with a liquid dump valve.

As the liquid level in the vessel rises, the float rises, which drops the rod on the trunnion. This opens the liquid dump valve and sending liquid out of the vessel.

As the liquid level in the vessel falls, the float falls, which raises the rod on the trunnion. This closes off the liquid dump valve and stopping flow of liquid from the vessel.

The dump valve regularly cycles through this routine, adjusting its opening to ensure that the rate of liquid flowing into the vessel matches the rate out of the vessel. 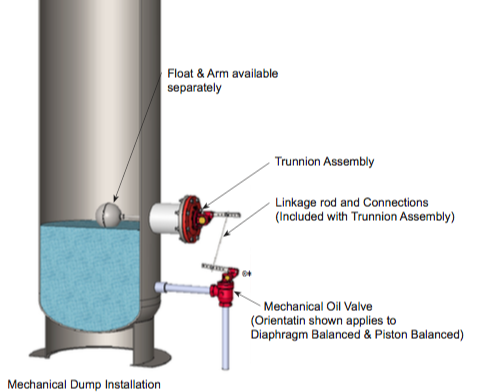 In order for the level control system to work correctly, the float ball must be filled with sand or BBs to achieve the appropriate weight to rest at the top of the liquid you are trying to control.

This quick tip helps you weight the float ball for the interface surface.

1. Thread a short metal pipe nipple onto the float ball to protect the threads

2. Drill a hole through the end of the float ball where the coupling is

3. Using a funnel, pour sand into the float ball

4. Insert the float ball and float rod into a bucket of fresh water

5. Tape the threads and attach the float rod

If you have further questions about weighting the float, reference our Liquid Dump Valve Installation and Maintenance Guide or reach out to your local Kimray representative.