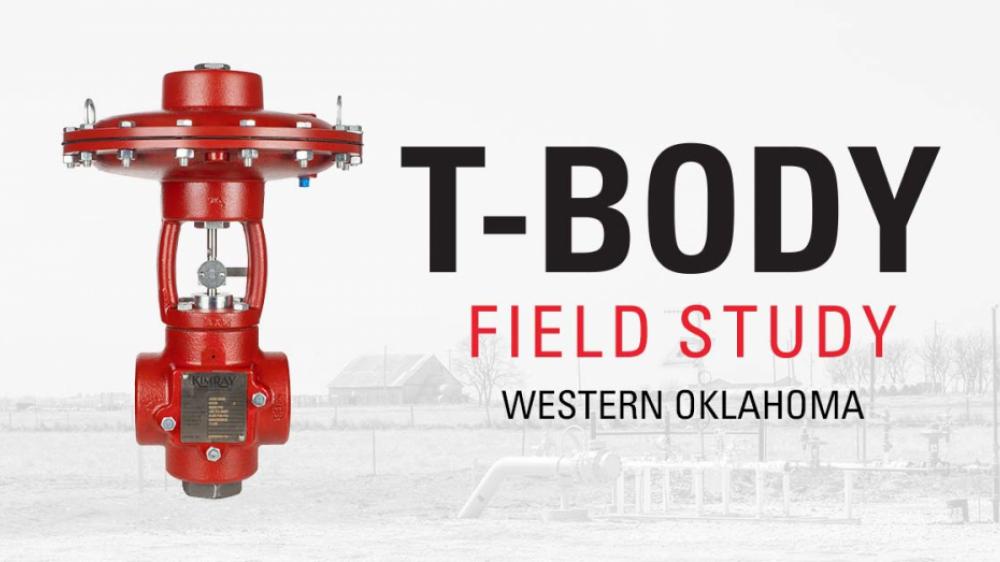 The T-Body High Pressure Control Valve was created to help oil and gas producers extend production time through flowback and in erosive applications.

It does this by utilizing a hardened D2 steel replaceable wear plug, which better withstands erosion and can be replaced without removing the valve body from the pipeline.

This plug reduces the amount of contact that high-velocity, erosive production has with the valve’s body, limiting the potential for valve damage.

The valve can also be fitted with a carbide trim, which is a hard metal we recommend using for production that contains a high amount of erosives.

In this field study, we’ll show how the valve performed at a site in Western Oklahoma.

A producer was operating plunger lift wells in very sandy conditions in Western Oklahoma. On these particular wells, they had transitioned to plunger lift during initial production, directly after flowback.

The problem they were facing was with the valves on their flowline.

After experiencing an increasing amount of sand downstream in their separator as well as inconsistent production from the wells, they decided to examine the valves and trim.

Every time this happened, they had to shut the well in, resulting in a loss of revenue and resources, and accumulating man-hour costs to have operators perform the repairs.

Tired of shutting in the well and spending money to replace their valves, the producer worked with the Kimray team in Oklahoma City to upgrade one well with a T-Body High Pressure Control Valve outfitted with carbide trim to see if it could better withstand the erosive fluid and improve uptime.

Whereas they had been replacing trim or bodies every 30-90 days before, after 6 months of operation the T-Body High Pressure Control Valve was still in good operation.

At the 6-month mark, the Kimray team replaced the plug for examination, and discovered the plug was only 37% worn through the plug despite 6 months of operation in the high volume of high-velocity sand.

The carbide valve trim was still operating well and didn't require replacement after 6 months of operation.

The producer has now installed this solution in 8 of their locations in Western Oklahoma and more in their operations in the Permian Basin.

“We’re having great success utilizing the 2400 SMD (MKLBWCB) in a through-body application for wellhead plunger control. Previously utilizing the 2400 SMT, we experienced a significant number of washed-out valve bodies, trims and seats in a short span of time due to the harsh operating condition.

"Since switching to the 2400 SMD as our standard wellhead plunger control valve in late 2020, we have experienced zero failures. The robust wear plug along with carbide seat and trim has allowed us to maximize production efficiency by reducing operational downtime.”

Chase Hendley
Chase Hendley serves as a Business Development Manager at Kimray in the Midcon and Permian Basin. He works with small and large producers, OEMs, and engineering firms to find the most effective solutions for controlling their operations.
More by Chase
POSTED IN: